Chi-squared (χ2) Test is a technique used in probability & statistics to check if the results of χ²-distribution is statistically significant under null hypothesis. χ²-distribution is a collection of data which is not uniformly distributed over the period of time. Chi-squared test requires χ²-statistic χ²0 & critical (table) value of χ²-distribution χ²e at a stated level of significance (α = 1%, 2%, 3%, 4%, 5%, 10%, 25%, 5% etc or α = 0.01, 0.02, 0.03, 0.04, 0.05, 0.1, 0.25, 0.5 etc) for the test of hypothesis (H0) in statistics & probability surveys or experiments to analyze samples which is not distributed uniformly or normally. Critical value of χ2 from χ2-distribution table represents the rejection area of distribution. The estimated value of χ² or chi-squared statistic (χ²0) is compared with the critical value from χ²-distribution p-value table at a stated level of significance to check if the test of null hypothesis accepted in statistical experiments. Users may use this below χ²-test calculator to estimate χ²-statistic (χ²0), critical value (χ²e) & hypothesis test (H0) to test the significance between two or more samples which are not normally or uniformly distributed over time.


Formula :
The below is the mathematical representation for χ²-test formula to estimate the quality of variances among two or more samples which are not normally or uniformly distributed over time to predict the characteristics of population parameters of a unknown distribution. 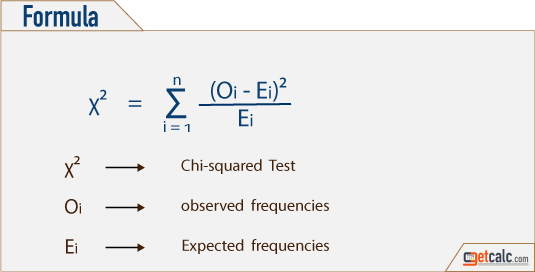 The below are the solved example problems for χ²-Test with step by step solution to analyze the two set of irregularly (nonuniform) distributed samples. Users may refer the below estimations to know what formula & input parameters are being used in the respective chi-squared calculations.